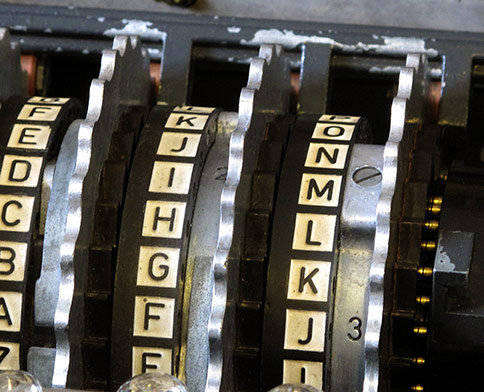 In 1918, the Germans were defeated in World War I. British military strength was reaffirmed. After the war, great economic and social crises arose in Germany. However, In this period, many German inventors overcome all obstacles and started to present their inventions to the world continuously. When World War II began, many of these inventions became a great backbone to Nazi Germany. The Enigma machine was also one of these inventions. During the war, Hitler’s Nazi Army secrecy depended on this machine. Breaking it was the allies only chance to win the war.

Enigma had the ability to create millions of secret messages and decode all the secret messages by itself. The messages were created by this machine sent to all German commanders in the war fields. The Germans had strong confidence in how the internal configuration of this machine worked. They believed that the allies could never break these secret machine codes.

First Enigma Machine And The Inventor

The first Enigma machine was invented by a German inventor called  Arther Scherbius in 1918. He wanted to create a mechanized encryption machine that can do encryptions and decryptions fast and securely. So, he built the Enigma Machine and marketed it’s first commercial version in 1923.

It was a high costly machine at that time. Because of that reason, only high-end customers could afford it. German banks and government sectors used these first Enigma versions. Then 1926, the Enigma company marketed its innovation to the German military. The German army had to agree to the proposal because at that time the secrecy of the German army military’s messages had already been compromised. After the German army adopted Enigma, they updated some functions of the machine and built the military version.

The Enigma machine has a Keyboard and a lamp board. The lamp board works like a computer screen. These two have twenty-six alphabetic letter keys.

Let’s think if we want to encrypt the word “HEI HITLER.” So, we turn on the machine and first type ‘H’ on the Keyboard. While typing ‘H, we will be able to see another letter lighting up on the lamp board. The machine never gives the same letter output. This way, the By machine internal functionality Enigma machine gives different letters to each letter we enter.

German Army Enigma machine could able to set up more than 150 trillion different ways. Therefore, the Enigma machine provided a unique code for each word we typed.

This is where Enigma operators type their original plain text. This included twenty-six alphabetic keys. It didn’t have numeric keys to represent numbers,

Rotors are the most crucial part of the Enigma machine. Enigma operators exchanged and changed settings on these rotors daily. First-generation Enigma machines used three rotors but later, German’s added fourth and fifth rotors to get extra security.

Each rotor has twenty-six connectors and secret wiring patterns to connect the connectors. For example, if we type H on the Keyboard, the signal goes through the first rotor wiring pattern and gives a different letter output to the second rotor.

First, Enigma models did not have a plugboard, and the ability to encode messages only depended on Rotors. So creators added Reflector to Enigma. What happens through the reflector is that the letters encoded through the rotors travel back through the rotors in a different wiring pattern than the pattern they came back.

We can only see the Plugboard in the military version of Enigma machines. This is the main reason that Enigma was too hard to crackable at that time. By using the Plugboard, the Enigma machine got extra millions of ways to encode the Nazi Army messages.

The Plugboard has twenty-six connector slots for representing the alphabetic letters. Enigma operator connects two of these slots via a wire.

Again to the same example. Let’s think the “H” slot is connected to the “A” slot, so if our last rotor output is “H,” It becomes “A,” and if our final output is “A, “that letter automatically converts to “H.” In this way, the Enigma operator has 13 swapped options.

Before the Enigma operator encrypts the German army messages, the operator must set up the machine to daily settings. Without the same settings in the machine, message receivers are not able to decrypt the messages correctly. Germans put these settings into a codebook and updated the book monthly. German Navy called this pink book. The books were printed with water-soluble ink to prevent them from falling into enemy hands.

Each day settings sheet told the German operator how to set up his Enigma rotor order and the position of the ring of letters around each rotor. Also, the sheet provided instructions for wiring up the Plugboard.

If the enemy captured an instruction book, they would be able to read all the secret messages. To prevent that, each message had its own secret rotor setting chosen by the operator.

Around 1932 with the French intelligence service data, Polish mathematician Marrian Rajewski was first time able to decode the Enigma messages. He figures out how the Germans had wired the enigmas keyboard to the first rotor. This was the first vital step in breaking Enigma. Polish also shared this data with the British intelligence service, and they were amazed by the Polish reports.

But unfortunately, the British couldn’t use the Polish data long time to crack the Enigma messages. That because Germans upgrade the Enigma machine with Plugboard and extra rotors. This became a huge headache for the British. One by one, Germans starts to win the battles on the land, sea, and sky. Especially German U-boats squads destroyed British supplements in the Atlantic sea.

British knew if they could crack the Enigma, that would become the end of the war.  For accomplishing this task British intelligence service made a team, including the country’s top cryptographers. Among them, there was a young mathematician Alan Turing.

Alan Turing and other codebreakers secretly work on the Bletchly Park, the British Intelligence Codebreaking department. Turing and his team only had 24 hours to break the Enigma because Enigma settings changed every 24 hours. Until Turing found a way to break the codes, everyday British cryptographers had to start their works from scratch.

Turing believed they never could be able to break the Enigma codes by hand. So his idea was to build an autonomous machine that works like an Enigma. This machine was known as a Bomb machine. The ultimate goal of this machine was to find the daily settings in the rotors, plugboard, and custom settings in the Engma machine. Once they have the Enigma settings, they could easily decode the Nazis’ messages.

Like the word, Bombe was a heavy machine. It was 7ft long, 6ft 6in tall and 2ft deep. Around 12 miles long cables are used to wire this beast machine. On the front side, the device has 108 drums.  The vertical column of three drums replicates the one enigma machine. This way, each machine represents 36 Enigma machines.

The first Bombe machine drums rotated with 50.4RPM later versions, developers update the RPM up to 120. This was capable of machine testing 17 576 positions for one rotor order in 20 minutes.

But some messages took more than 10 hours to decrypt, and some are never able to interpret. Also, in 1943 Germans added the 4th rotor to the Enigma. This makes a few months blackout to the codebreakers. But after a few months, they were able to update the Bombe machines with these settings too.

Without Alan Turing British could be defeated in the war. To admire his inventions and theories scientists named Alan Turin as the founding Father of Computer Science.

Creating a system to break Enigma codes is now a common thing among computer science and electronic students.

You can type messages and experience the Enigma settings by clicking here.

War analysts say Breaking the Enigma shortened the war by two years. It saved millions of lives and properties on both sides. Germans never knew their Enigma Codes were compromised. They had high trust in how the Enigma system worked, so they think it was unbreakable. Until 1970, the British also kept the Bombe machine as a secret. Many of the Bombe machines and project files were destroyed after the war.